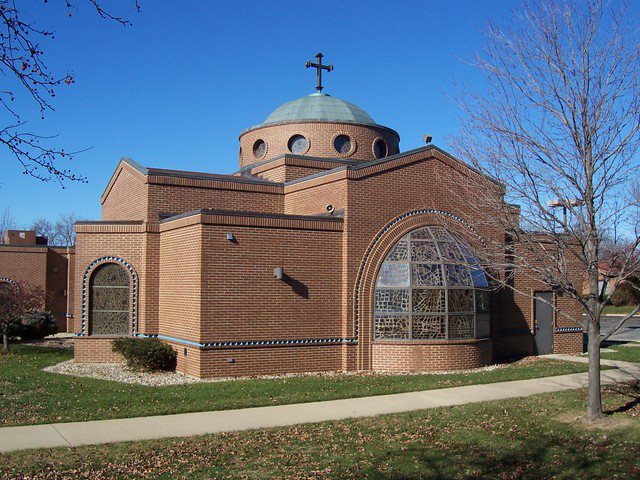 In 1952, Gus Leo Furla convinced others to join in the purchase of a house at the corner of Locust and Green Streets, converting two rooms into a humble chapel for occasional services.

In late 1960, Peter F. Tomaras, John Lessaris, Gus Furla and George Lessaris pledged significant funds to launch a  project to build a real church. In 1961 a brick building was erected at the Locust and Green Street site. With the donations of a holy altar, icons, and other religious necessities, the first floor became the temporary chapel. The basement accommodated frequent church and social functions to raise funds toward the dream of a true Orthodox church. The official charter of the Three Hierarchs Orthodox Church was approved by the Chicago Diocese in 1965.

In 1970, the Green Street building was sold in order to purchase the Mormon church on 1401 W John Street in Champaign. Over the years, parishioners made this new church as "Byzantine" as possible by donations, all the while paying down the mortgage and keeping alive the dream of building a true Orthodox church.

In 1983, John Trebellas provided both the leadership and the funds that would enable the parish's dream to become reality. This wonderful Byzantine-design church, including a Greek Heritage Center, stands on beautifully landscaped grounds just off Devonshire Drive in south Champaign, near the University of Illinois campus. In the summer of 1985, the first service was celebrated in he new Church, and on October 3, 1999, the Church was consecrated in commemoration of the Three Holy Hierarchs - Basil the Great, Gregory the Theologian and John Chrysostom.

Through the years, a continuous flow of people, both Greek and non-Greek, as well as those from other faiths, have embraced Orthodoxy at Three Hierarchs, changing the face of our congregation today. In addition to our multi-cultural membership, Orthodox university students have become the adopted children of the parish, filling the pews, participating in outreach activities, serving as Sunday School teachers, and even serving on the Parish Council, infusing new strength into the congregation through their special talents and devotion.

To learn more about our parish's journey, and to enjoy all of the wonderful photos along the way, please explore our 50th anniversary book below.